KRISTOFFERSSON: WE WILL RELOAD AND RETURN READY TO FIGHT IN RIGA

For one reason or another, the 2021 FIA World Rallycross Championship has yet to kick fully into gear for Johan Kristoffersson and KYB EKS JC – but it is certainly not for any lack of pace or performance. At Lohéac last weekend (3-5 September), the Swede was once again out of luck – but he has vowed to ‘reload and be ready to fight’ in Riga next time out.

For one reason or another, the 2021 FIA World Rallycross Championship has yet to kick fully into gear for Johan Kristoffersson and KYB EKS JC – but it is certainly not for any lack of pace or performance. At Lohéac last weekend (3-5 September), the Swede was once again out of luck – but he has vowed to ‘reload and be ready to fight’ in Riga.

Spurred on by a Q1 disqualification in Spain and a double puncture that ruled him out of the final on home soil in Sweden, Kristoffersson was fired-up to hit back in France. Following a spectacular save in Q1 – with his Audi S1 entering the first corner at almost 180 degrees to the chasing pack after receiving a tag from behind – the three-time world champion went on to top the times in Q2 and Q3 to secure TQ honours in the intermediate classification.

From pole position in the first of the weekend’s semi-finals, Kristoffersson then looked set for a race win until driveshaft issues on the last lap relegated him to third at the chequered flag.

Back in the paddock, it was discovered that the gearbox was also damaged and would need to be replaced. The KYB EKS JC mechanics produced a herculean effort to change it in just 16 minutes, but unfortunately it was not enough. As the Audi arrived at the pre-grid less than a minute late, Kristoffersson was denied a spot in the final and had to watch disconsolately from the sidelines.

“What a weekend,” the 32-year-old Johan Kristoffersson reflected. “It started well, we were fast and I felt comfortable in the car. We had a good tyre strategy and tried a few things out on the set-up in Q4, which we were very happy with. Our pace was fantastic in the semi-final – the car felt really, really good and I was just cruising around saving tyres – but then on the last lap, the driveshaft snapped.

“Thankfully, I managed to still finish third, but we subsequently realised the gearbox was also damaged so we needed to change that too. We were very short on time, and it should really be impossible to change a gearbox that quickly but the guys put in a tremendous effort. Unfortunately, when we reached the pre-grid, we were seconds too late and were not allowed to start, which was obviously a real shame.

“Big congratulations to the Hansens. They did a fantastic job again and are on a real roll at the moment. We have not had the margins on our side so far this year and even though the season is long, it is tough in the championship table now – but of course, we will continue to focus on the future, reload and be ready to fight in Riga.”

Indeed, Kristoffersson will travel to Latvia sitting 28 points adrift of the summit of the standings, but he boasts an excellent track record around the challenging Biķernieki trase, having won there three times since 2017. With double points on offer next weekend (18-19 September), KYB EKS JC Team Principal Joel Christoffersson has vowed an immediate fightback.

“Let’s say this – motorsport is a tough sport and it feels really, really hard when you lose,” acknowledged Joel Christoffersson. “Once again, we had a very good weekend initially, where we took TQ and led the semi-final with Johan until we had the gearbox problems. I’m so proud of the mechanics who did a big job in such a short time. When we reached the starting area, the marshals had just locked the gate and we missed the final by about 30 seconds…

“Of course it feels really tough that this is happening right when we were beginning to pick back points in the championship. It feels a bit like someone has kicked our legs from under us at every round this year, but we are a team that never gives up. There are many events left and I promise that we will give our all in Riga. Both Johan and the team like that track, and we are really looking forward to the event.” 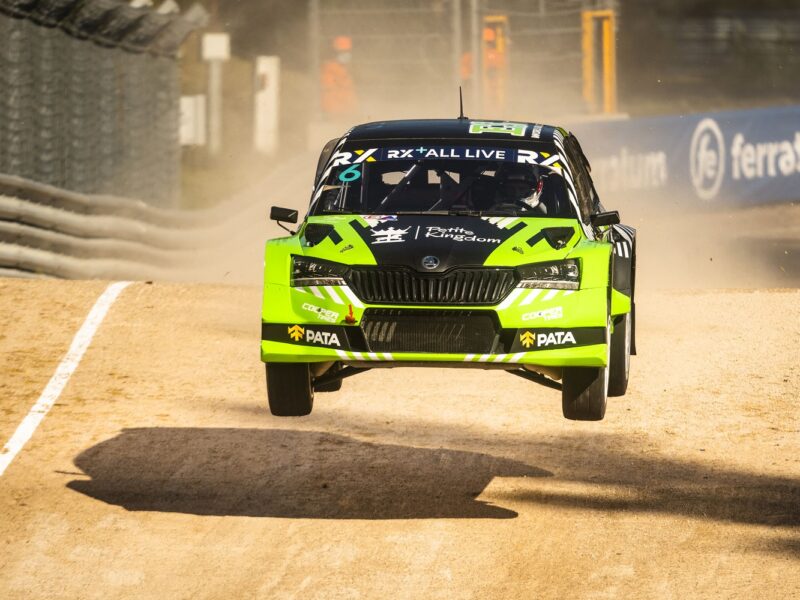 GRÖNHOLM CHARGES INTO CHAMPIONSHIP CONTENTION WITH VICTORY IN RIGA