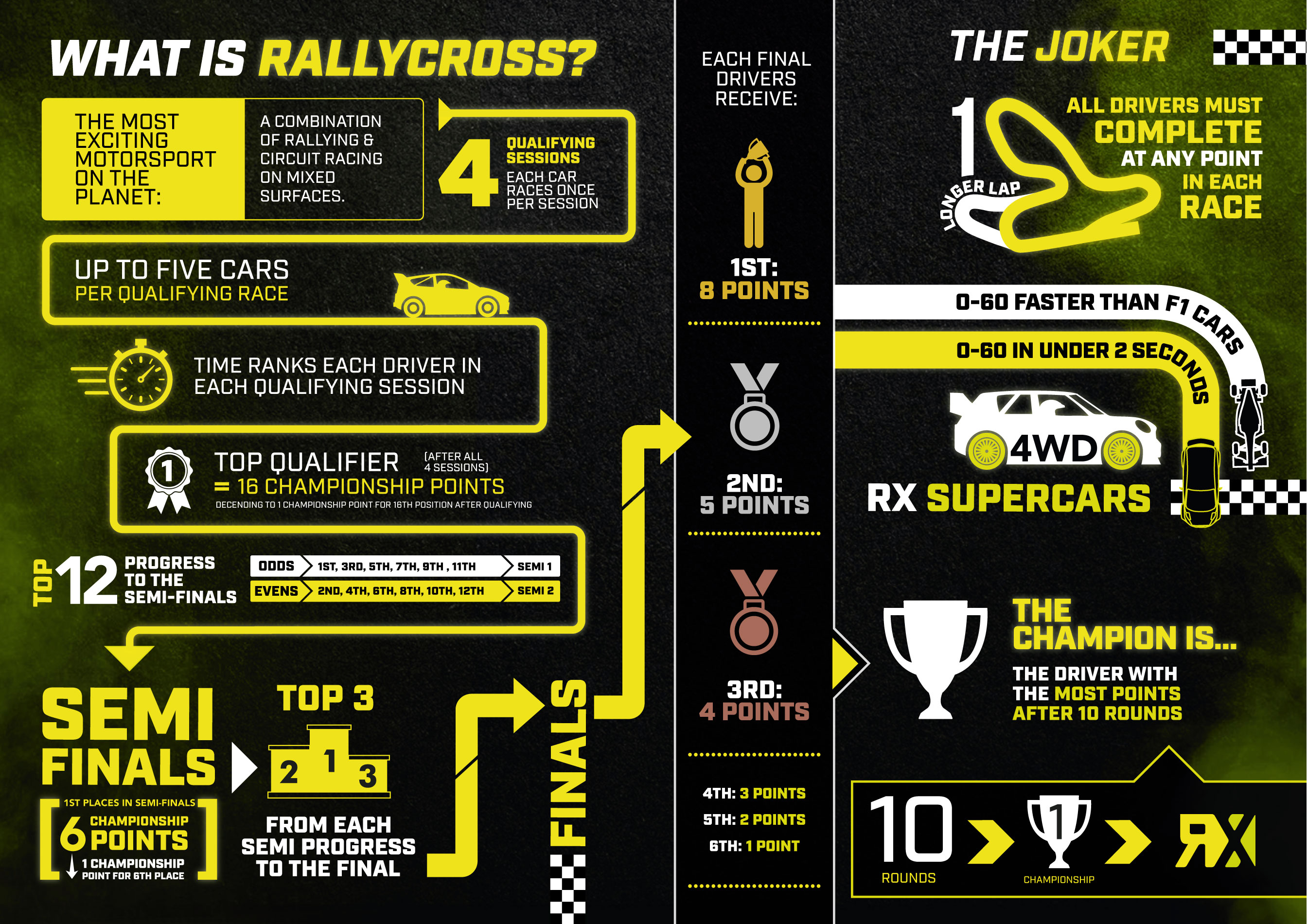 Rallycross is a combination of rallying and circuit racing. It is head-to-head short, sharping racing on mixed surfaces (dirt and asphalt) contained within amphitheatre venues. High profile drivers are equipped with RX Supercars with over 600bhp and the ability to accelerate from 0-60mph in less than two seconds – faster than an F1 car.

What is the history of rallycross?

Rallycross was invented by Robert Reed, who was the producer on ITV’s World of Sport programme at the time. The first event took place at Lydden Hill on 4 February back in 1967, where it quickly became a staple of Saturday afternoon sports in the UK with both ITV and BBC broadcasting rallycross. The popularity of rallycross soon spread, with the first event on the European mainland taking place in Holland in 1969, with the Scandinavian rallycross debut taking place in Sweden two years later.

The FIA World Rallycross presented by Monster Energy was inaugurated in 2014 in Portugal after the FIA granted the World Championship status to the sport, becoming, at this moment, one of only four championships in that category.

The FIA World Rallycross Championship presented by Monster Energy (World RX) was established in 2014. In 2020 there will be 11 rounds, including double-header event in Riga’s Biķernieki Circuit, and the first visit to Germany’s Nurburgring.

Headline category. Hot hatches /superminis turned into the ultimate racecars by the addition of turbocharged, two-litre, 600bhp engines and four-wheel drive. They accelerate from 0-60mph(100km/h) in 1.9 seconds – faster than an F1 car.

Front-wheel drive ‘hot hatches’ using 1600cc engines. Many of the top Supercar drivers have developed from here,including Timerzyanov and Bakkerud.

Projekt E will use STARD’s “REVelution” EV powertrain systems which will produce up to 450kW (613bhp) combined power, 1100Nm of instantaneous torque and produce a top speed of 240km/h.

Each event is made up of open practice sessions, four rounds of timed qualifying races, and two knock out semi-finals and one final. The qualifying races are run over four laps with a maximum of five cars starting abreast, while the finals are run over prolonged distance of six laps, with six cars being lined-up side-by-side over three starting rows.

Starting positions in the races are determined by a draw that is carried out beforehand.

Starting positions determined according to timed classification of the previous qualifying. Qualifying Classification is based on overall time of the driver, not the position within a race. For Q2 and Q3 – depending on the draw, start positions get allocated alternating – once starting from slower, and once starting from fastest. The draw decides the order (slowest-fastest or fastest-slowest), and this changes from round-to-round. For Q4, though, drivers are lined-up starting from the slowest (first race) to the fastest (final race). After Q4 there will be an Intermediate Classification according to each driver’s total points scored in the four qualifiers (see scoring section below).

Finals will also have six starters, arranged over three rows and will be run over six laps. The semi-final #1 winner will start on the “pole” side of the grid, followed by the other semi-final winner. The same procedure will be used between the two second-placed drivers and two third-placed drivers. The winner of the final will be the winner of the event. Positions one to six in the final classification will be according to the result of the final. The remaining drivers will be classified according to points scored in the event.

An alternative section of track that can add at least two seconds to the lap time, and through which every driver must pass once in each qualifying race, semi-final and final. Failure to take the Joker Lap is penalised by 30-seconds in the qualifying heats, and by being classified last and loss of points in a semi-final or final.

Drivers score Championship points at three stages of the event.
The top 16 drivers after the four qualifyings (Intermediate Classification) score points starting from 16 for the best placed, down to one point for 16th place.
The top 12 progress to two six car Semi-Finals in which points from six for the winner to one for sixth place are awarded. The top three from each Semi-Final then enter the Final.

Maximum score in an event is 30 points (16+6+8). All points scored in all 12 rounds count.
The Team’s Championship will include all points scored by the two team drivers at all events.